An EU directive bans the use of fluorinated greenhouse gases with global warming potential exceeding 150 for mobile air conditioning systems in motor vehicles since January 2011. Thus the current refrigerant tetrafluoroethane (R134a) has to be replaced. Tests in laboratory and car showed that the new refrigerant 1234yf selected by car industry can lead to fires.

The refrigerant that has been used in mobile air conditioning systems up to present is the fluorinated greenhouse gas tetrafluoroethane (R134a). In 2013, passenger cars in Germany alone leaked 2,400 tonnes of the greenhouse gas R134a, or 3.5 million tonnes of CO2 equivalents – the amount of CO2 that 1.6 million passenger cars emit with their exhaust per year.

1234yf as a refrigerant is a relatively new substance with specific properties that must be considered when used as a refrigerant for 1234yf is flammable and produces hydrogen fluoride (HF) upon combustion. 1234yf has a Global Warming Potential four times higher than CO2. What is even more important to note is the technical possibility of refilling 1234yf-run mobile air conditioning units with the even more climate-damaging R134a. In contrast, only CO2 can be refilled as the refrigerant in CO2-run systems – which is a great advantage considering that in some countries ozone-depleting chlorofluorocarbon (CFC) is still being put into mobile air conditioning systems.

Laboratory test of the ignition behaviour of the refrigerant 1234yf

In October 2009 the Federal Environment Agency commissioned the Federal Institute for Materials Research and Testing (BAM) to test the ignition behaviour of the refrigerant 1234yf in comparison to R134a which has been used up to now. Tests were conducted in such a way as to replicate as much as possible the use of this substance in mobile air conditioning systems.

A summary of the most significant outcome of the BAM tests, concluded in June 2010:

The BAM tests prove that there are risks associated with the use of 1234yf. The risks result from the hydrogen fluoride that is produced in a fire and, at high temperatures, is also released from the refrigerant 1234yf without the presence of fire. Some 30,000-40,000 vehicles catch fire every year in Germany. The formation of hydrogen fluoride can be expected in such an event. BAM did not quantify the additional risk as only automobile manufacturers do this for specific vehicles. However, it points out that a comprehensive risk analysis is required if 1234yf is used and many preventative measures must be taken, e.g. thorough isolation of hot surface in the engine bay, installation of an automatic extinguisher system in the engine bay, measures to prevent entry of hydrogen fluoride into passenger compartment, measures to prevent generation of sparks, also in accidents (including cutting electric power), as well as education of rescue workers.

The BAM investigations are an important part of the ongoing dialogue about the safety of using refrigerant 1234yf in mobile air conditioning systems. Automobile manufacturers are called upon to take the outcome into account in their actions and decisions. 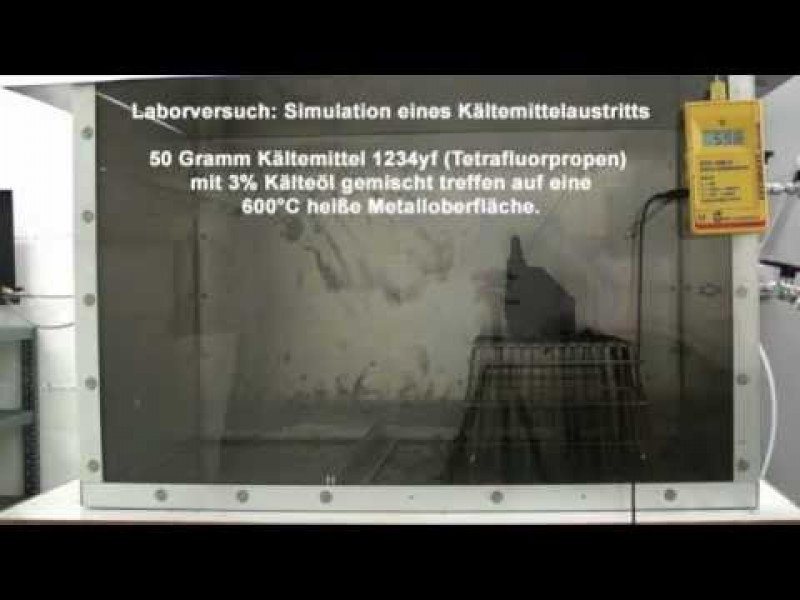 The video shows a simulation of refrigerant release: 50 grams of 1234yf (tetrafluoropropene) blended with 3% refrigerant oil are released on a hot metal surface (600°C).