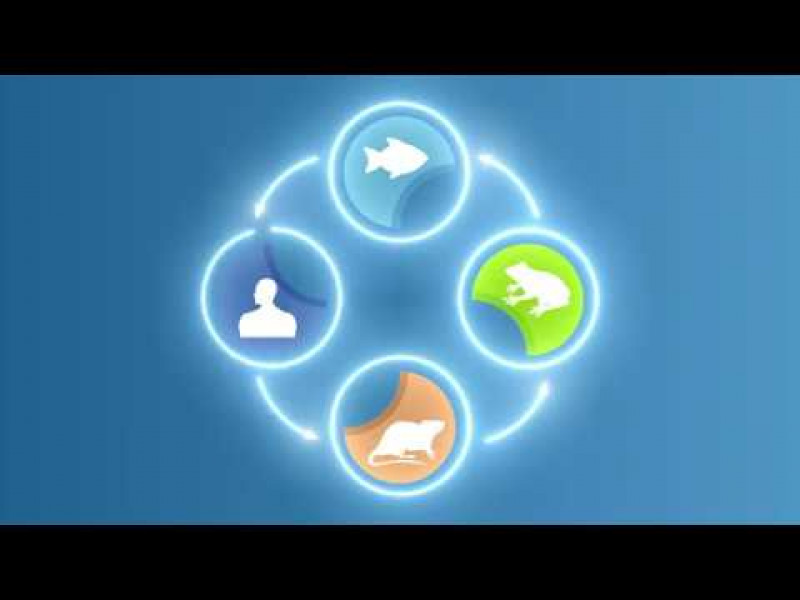 The ERGO (EndocRine Guideline Optimisation) project aims to improve the identification and regulation of hormonally active substances (endocrine disruptors). It will be shown to what extent the effects of endocrine disruptors in mammals can be extrapolated to non-mammals and vice versa. The thyroid hormone system will be used as the basis for the investigations.

To protect human health and the environment from endocrine disruptors, the identification and risk management of endocrine disruptors (EDs) needs to be improved and made more efficient. The EU Horizon 2020 research project ERGO is examining the extent to which it is possible to transfer the effects of EDs between different groups of vertebrates. The starting point is the well-founded assumption that e.g. an adverse effect in a fish or amphibian also indicates adverse effects in humans and vice versa. Thus, the aim of the study is to bridge the ED research and identification on mammals and non-mammals and thereby to avoid animal experiments. The basis of research in this project is the thyroid hormone system, which is highly conserved (i.e. very similar) within the class of vertebrates.

To establish new approaches, ERGO uses the concept of Adverse Outcome Pathways, or AOPs for short. This concept integrates the exposure of the organism to a chemical, the chemical and biological interactions in the organism and the adverse effect on individual organisms or entire populations in a chain of biologically linked events. One goal of the project is to identify interfaces and commonalities between the interactions in different representatives of the vertebrate class, which can then be used to extrapolate and predict effects across species. In order to develop such AOP networks, ERGO is conducting various experiments with cell systems (in vitro) and animals (in vivo) as well as modelling and biotransformation experiments (in silico).

In the European Union (EU), there are various regulations that require screening and testing of EDs according to the EU Test Methods Regulation, for example the Plant Protection Products Directive. However, identifying EDs and their effects is challenging, especially due to the often weak data available for little studied or previously unknown EDs. At present, data from the assessment of human health effects are given little attention in the assessment of environmental effects and vice versa. Mutual recognition and consideration of test results could make the investigation and identification of EDs faster, easier and more cost-efficient. This would help in the implementation of EU-wide regulations and also encourage the development of products which are free from endocrine disruptors.

The ERGO project started in January 2019 for a duration of 60 months. First experiments are now being conducted after the selection of chemicals to be tested. Project coordination is led by Syddansk Universitet in Denmark. In addition to the German Environment Agency and Syddansk Universitet, many other universities and research institutions and representatives of industry are involved in the project. There are 15 partners in total from 8 countries. UBA acts as coordinator and advisor and is responsible for knowledge transfer within the project.
ERGO is part of the EURION Cluster of eight research projects focusing on EDs.

Expected results of the project include an extension of existing testing guidelines for EDs with a view to better identification of their impact on the thyroid system, and a strategy for the extrapolation of negative effects among vertebrate classes and thus improve risk assessment of EDs overall.

Please contact us exclusively by e-mail: buergerservice [at] uba [dot] de.
Unfortunately, we are currently not available by telephone.
There may currently be delays in answering enquiries. We ask for your understanding.
The visitors' room in Dessau-Roßlau is temporarily closed.